In one of the largest such ceremonies in history, Pope John Paul II canonised Padre Pio of Pietrelcina on June 16, 2002. It was the 45th canonisation ceremony in Pope John Paul’s pontificate. More than 300,000 people braved blistering heat as they filled St. Peter’s Square and nearby streets. They heard the Holy Father praise the new saint for his prayer and charity. “This is the most concrete synthesis of Padre Pio’s teaching,” said the pope. He also stressed Padre Pio’s witness to the power of suffering. If accepted with love, the Holy Father stressed, such suffering can lead to “a privileged path of sanctity.”

Many people have turned to the Italian Capuchin Franciscan to intercede with God on their behalf; among them was the future Pope John Paul II. In 1962, when he was still an archbishop in Poland, he wrote to Padre Pio and asked him to pray for a Polish woman with throat cancer. Within two weeks, she had been cured of her life-threatening disease.

Born Francesco Forgione, Padre Pio grew up in a family of farmers in southern Italy. Twice his father worked in Jamaica, New York, to provide the family income. At the age of 15, Francesco joined the Capuchins and took the name of Pio. He was ordained in 1910 and was drafted during World War I. After he was discovered to have tuberculosis, he was discharged. In 1917, he was assigned to the friary in San Giovanni Rotondo, 75 miles from the city of Bari on the Adriatic.

On September 20, 1918, as he was making his thanksgiving after Mass, Padre Pio had a vision of Jesus. When the vision ended, he had the stigmata in his hands, feet, and side. Life became more complicated after that. Medical doctors, Church authorities, and curiosity seekers came to see Padre Pio. In 1924, and again in 1931, the authenticity of the stigmata was questioned; The Vatican initially imposed severe sanctions on Pio in the 1920s to reduce publicity about him: it forbade him from saying Mass in public, blessing people, answering letters, showing his stigmata publicly, and communicating with Padre Benedetto, his spiritual director.

Though Padre Pio was not permitted to celebrate Mass publicly or to hear confessions, he did not complain of these decisions, which were soon reversed. However, he wrote no letters after 1924. His only other writing, a pamphlet on the agony of Jesus, was done before 1924.

The Vatican’s decision to restrict his faculties, removing him from public life, was communication in the following statement published by the Vatican at that time:

“Padre Pio is to be stripped of all the faculties of his priestly ministry except the faculty to celebrate the Holy Mass, which he may continue to do, provided that it is done in private, within the walls of the friary, in the inner chapel, and not publicly in church.”

It was a difficult cross for him to bear, but he obeyed and submitted to the decree. The superior of the monastery read to Padre Pio the decree and the saintly friar responded;

“God’s will be done … The will of the superiors is the will of God.”

Once the restrictions were finally lifted, Padre Pio rarely left the friary after he received the stigmata, but busloads of people soon began coming to see him. Each morning after a 5 a.m. Mass in a crowded church, he heard confessions until noon. He took a mid-morning break to bless the sick and all who came to see him. Every afternoon he also heard confessions. In time his confessional ministry would take 10 hours a day; penitents had to take a number so that the situation could be handled. Many of them have said that Padre Pio knew details of their lives that they had never mentioned.

Padre Pio saw Jesus in all the sick and suffering. At his urging, a fine hospital was built on nearby Mount Gargano. The idea arose in 1940; a committee began to collect money. Ground was broken in 1946. Building the hospital was a technical wonder because of the difficulty of getting water there and of hauling up the building supplies. This “Home for the Relief of Suffering” opened its doors on May 5th, 1956, as a 300-bed facility. Today, the hospital manages 900 beds, 206 elderly care beds, 2,900 employees, 60,000 annual admissions, 9,500 surgeries per year, and over 1.3 million annual outpatient services, making it one among the most regarded in Europe. The hospital is divided among 30 medical and surgical wards, 50 clinical specialities, and 4,300 diagnostic and therapeutic services. It is now a world-renowned private scientific research hospital.

A number of people have reported cures they believe were received through the intercession of Padre Pio. Those who assisted at his Masses came away edified; several curiosity seekers were deeply moved. Like Saint Francis, Padre Pio sometimes had his habit torn or cut by souvenir hunters.

One of Padre Pio’s sufferings was that unscrupulous people several times circulated prophecies that they claimed originated from him. He never made prophecies about world events and never gave an opinion on matters that he felt belonged to Church authorities to decide. He died on September 23, 1968 and was beatified on 2nd May 1999. 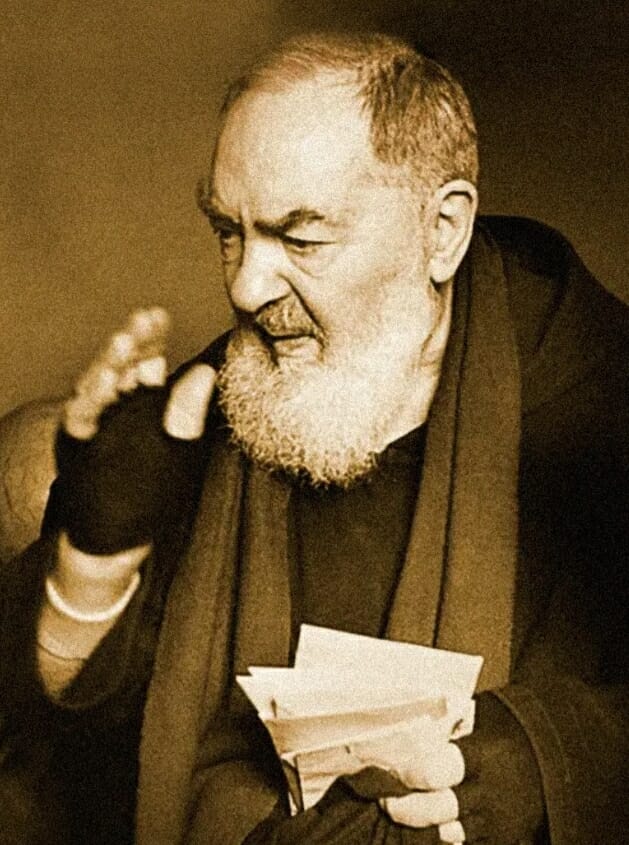 Referring to that day's Gospel (Matthew 11:25-30) at Padre Pio’s canonisation Mass in 2002, Saint John Paul II said: “The Gospel image of ‘yoke’ evokes the many trials that the humble Capuchin of San Giovanni Rotondo endured. Today we contemplate in him how sweet is the ‘yoke’ of Christ and indeed how light the burdens are whenever someone carries these with faithful love. The life and mission of Padre Pio testify that difficulties and sorrows, if accepted with love, transform themselves into a privileged journey of holiness, which opens the person toward a greater good, known only to the Lord.”